There are a lot of nuggets of information to be found about Kylie's music all over the web. This page is an attempt to pull it all together and answer some of the questions asked regularly by Kylie fans, old and new alike.

Are you a Kylie expert? Do you have a question and answer that you think should be included on this page? If so, please use the contact form to let me know!

Which of Kylie's unreleased tracks and mixes have leaked onto the Internet?

The following are the unreleased tracks that have leaked organised by album era [year in brackets is the year of leak] - there have been others that have since been released officially, such as Stay This Way and Made of Glass.

What was on the Kylie X sampler 3-disc CDR set?

In May 2007, news spread of a 3-disc CDR set containing 49 Kylie demos being in the hands of a Kylie fan. Some of the tracks have titles the same as old demos and releases. At least seven of the songs are tracks pitched to Kylie and are sung by session singers but around 42 of the other demos are true Kylie demos and outtakes. A few of the tracks leaked onto the Internet in the following years, with the majority of the remaining tracks leaking on 3rd/4th February 2017. Thanks to Kane Walker for much of this information. The tracks on this CDR set are:

* Labelled as Kylie but actually sung by session singers.

What is the City Games album?

City Games was a fake tracklisting for Kylie's third album with Parlophone that was 'leaked' onto the web before the official Body Language announcement. Not only did it have full writing credits for all of the tracks, but contained three tracks that have since been released and even had a full track-by-track review written by someone. Whether there was some truth in the rumoured album is therefore uncertain. However, the tracklisting contains a track co-written by Kylie's sister, Dannii, which has since been denied, and also two tracks with Pharrell Williams of Neptunes fame, which have also been denied. The tracklisting was as follows:

What is 'Hearing Aid - A World Without Music'? 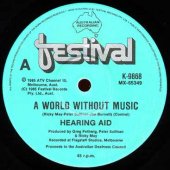 It's a charity single released in 1985 in Australia by Festival Records featuring a very young Kylie. Proceeds went to the Australian Deafness Council. Written by Ricky May, Peter Sullivan and Jim Burnett. Produced by Greg Pethwig, Peter Sullivan & Ricky May. Recorded at Flagstaff Studios, Melbourne.

What albums by other artists feature Kylie?

Thanks to Patrick Coughlan for help with this list. Know of any other albums featuring Kylie? Please contact me if you can help!

What was the Rapino Brothers' album?

There was no Rapino Brothers' album, as such, but Kylie did record 8 tracks with them in preparation for her first album with deConstruction. They were recorded in 1993, and some still remain unreleased or unheard. The eight tracks were:

At around the same time, Kylie also recorded two tracks with St Etienne:

What tracks were on the original version of the Impossible Princess album?

Kylie recorded a whole album with Brothers in Rhythm that was due to be released in January 1997. However, it was decided that she should record with other producers and so some of the original tracks were never released. The original tracklisting was as follows:

Short answer: No. Due in part to widespread mis-labelling of tracks on P2P networks etc., these tracks are often attributed to Kylie but are in, in fact, nothing to do with her.

What tracks did Kylie record for her original demo tape for Mushroom Records in 1985?

Kylie used the money she made from The Henderson Kids to book the studio time to record a 3-track demo tape. The tracks were:

What tracks has Kylie performed live but never recorded?

Kylie has performed a few tracks live that have never been recorded for commercial release. These are:

What classic Jazz tracks did Kylie record for the unreleased Jazz album in 2004?

What were the HotDiscs fan club CDs?

These were bootleg CDs produced by the former Australian website HotDiscs for members of the online mailing list. Although unofficial the 1996 & 1997 ones are factory pressed CD's. Tracklistings for some of the releases are as follows: 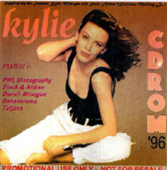 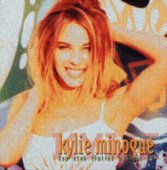